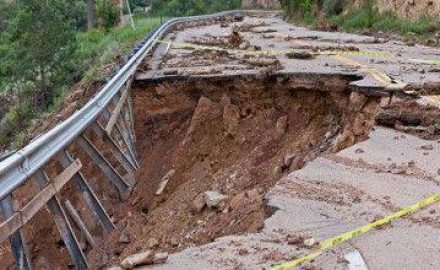 Ibanda Resident District Commissioner; Eliasto Akatuheebwa  together with security operatives and staff of environment have ordered the immediate closure of a quarry at Mabanga hill in Ibanda  municipal where residents have been mining stones.

This follows the last Sunday landslide in Mabanga village where houses, commercial shops, abattoirs, property were destroyed and some animals and hens covered by soil.

Some of graves were stripped open by running floods and stones. The landslide was a result of heavy rain that left trees and banana plantations devastated.

The closed quarry has been a source of income to over one thousand residents who worked there. www.mknewslink.com has learnt.

“Trees prevent such disaster from happening, so I encourage you residents to embrace tree planting as one of the methods to prevent landslides and floods in this area” said Eliasto  Akatuheebwa.

Akatuheebwa visited the affected villages, and said the leaders  in the  district have appealed to Prime minister’s office for relief.

As heavy rains have started, many villages in Ibanda district have been affected with floods and landslides from hills, wind causing havoc to crops especially the banana and coffee plantations.

House roofs have been blown off where as roads made impassable hampering the delivery of services.

In Katooma cell, Ibanda municipal, the road was temporarily closed from transport vehicles and bodabodas for two days, cutting off Kamwenge district as huge stones blocked the main road from Ibanda town to Kabujogera town in Kamwenge. 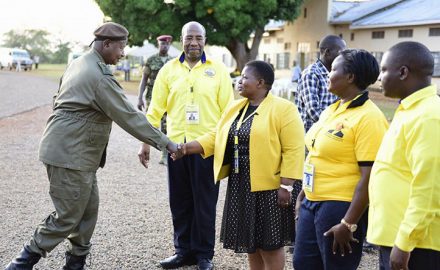 “AGE LIMIT TO BE REMOVED NOT LATER THAN MONTH”-NRM MPS

The planners of the plot to remove presidential age limit from the Constitution want the process to be finalized before Independence Day, 9, October.

After living in denial for exactly one year when an attempt to amend article 102 (b)  was kicked out on technicalities, Ministers and over 200 NRM MPs finally pronounced their intentions yesterday morning.

In September 2016, a motion being moved by Hon. Kafeero Ssekitoleko to amend the same article was rejected by MPs though carefully supported by the Attorney General, William Byaruhanga.

The Executive and NRM MPs distanced themselves from the then Ssekitoleko’s project but the public kept the debate alive until yesterday when it was openly supported.

www.mknewslink.com  has learned that the Bill for the Constitutional amendment of article 102 (b) set to be introduced by Igara County MP, Raphael Magyezi, will be handled in the shortest possible time.

A minister, who is stealthily working behind the scenes just like 7 of his other colleagues, told www.mknewslink.com  last night that the Bill won’t take the usual two to six months.

“We need this thing (amendment) to get out of the way as fast as possible. It should be done before Independence Day,” the minister, who asked not to be named, said.

According to the rules of procedure of Parliament, the relevant committee has 45 days to process the Bill but it always exceeds such a timeframe.

The champions of age limit removal, however, want the Committee of Legal Affairs to work on the Bill within one week when the Speaker refers it to their desk next week. 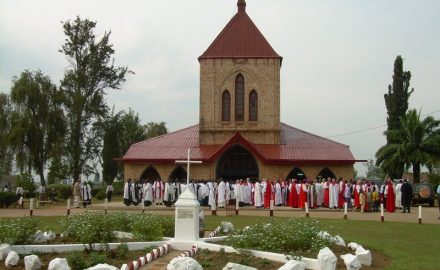 Police in Lira District are holding a reverend who was arrested while allegedly naked in another man’s bedroom at Ober Entebbe in Lira Town.
He was by yesterday still being kept at Lira Central Police Station in Lira District.
The reverend at St. Paul Church of Uganda at Barapwo village in Lira district was detained over accusations of trespass and claims that he sexually harassed another man’s wife.
Police detective Kizza Odongo said they arrested the 38-year-old reverend while naked in another man’s bedroom.

But the reverend insists he was only “cleansing the room” on invitation before police arrested him.
“I just came to pray for her and the family as I always did. But when she demanded we go and pray from the bedroom, I couldn’t decline since the room needed cleansing,” the reverend said in a statement recorded at the police station.

But the police detective claims that he and the woman’s husband both hid under the bed while the man of the cloth and the woman got intimate before they tumbled into the bedroom.
“After a tip-off, I hid with the husband under his marital bed and when he (the reverend) burst in, he told the woman that he had only 30 minutes to have the work done before he held her and started romancing in the sitting room,” Mr Kizza said.

The detective says the woman interrupted the intimate session and whispered that they relocate to the bedroom because a previous romance in the sitting room where the priest declined to sleep with her had left her on “fire” and also distressed.
“He took several minutes by the bedroom door asking her whether her husband was really away, but soon got inside and started undressing as he collapsed onto the bed, and that was when we pounced on him,” the police detective told www.mknewslink.com yesterday.

The police said the reverend would be charged with criminal trespass and malicious damage.