CANON MZEE KYAGONGO LAID TO REST AT AGE OF 113 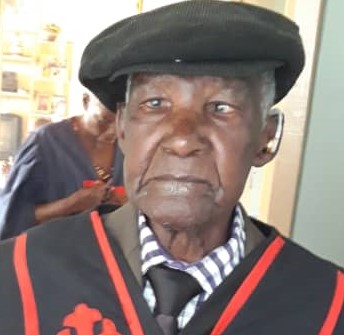 People from Bushenyi and other surrounding districts yesterday converged at St Kagwa in  the home of the late Mzee Kyagongo who died at the age of 113.

Kyagongo died after falling sick for 6 months because of old age.

Before falling sick he would walk from his home in St.Kagwa about 2km to Bushenyi town to have a discussion with other elders at friends hotel in Elders’ forum.

Kyagongo was a well-known saved Anglican Christian who decampaigned modern ways of living such as Ear rings, lipstick and hair plaiting among others.

Mzee Kyagongo is believed to be one of the oldest men in Ankole and a devoted Christian who used to preach at All saints church Bushenyi.

He lost his wife longtime ago but refused to remarry despite calls from friends to remarry.

While preaching at the burial the Bishop of West Ankole Johnson Twinomujuni called upon the old people to interact with young people to make sure that there is no missing link between the two generations.

The Member of Parliament for Bushenyi Ishaka Municipality Gordon Arinda called upon God to rest Kyagongo in eternal peace since he has done a lot for Him and the entire community of Bushenyi.