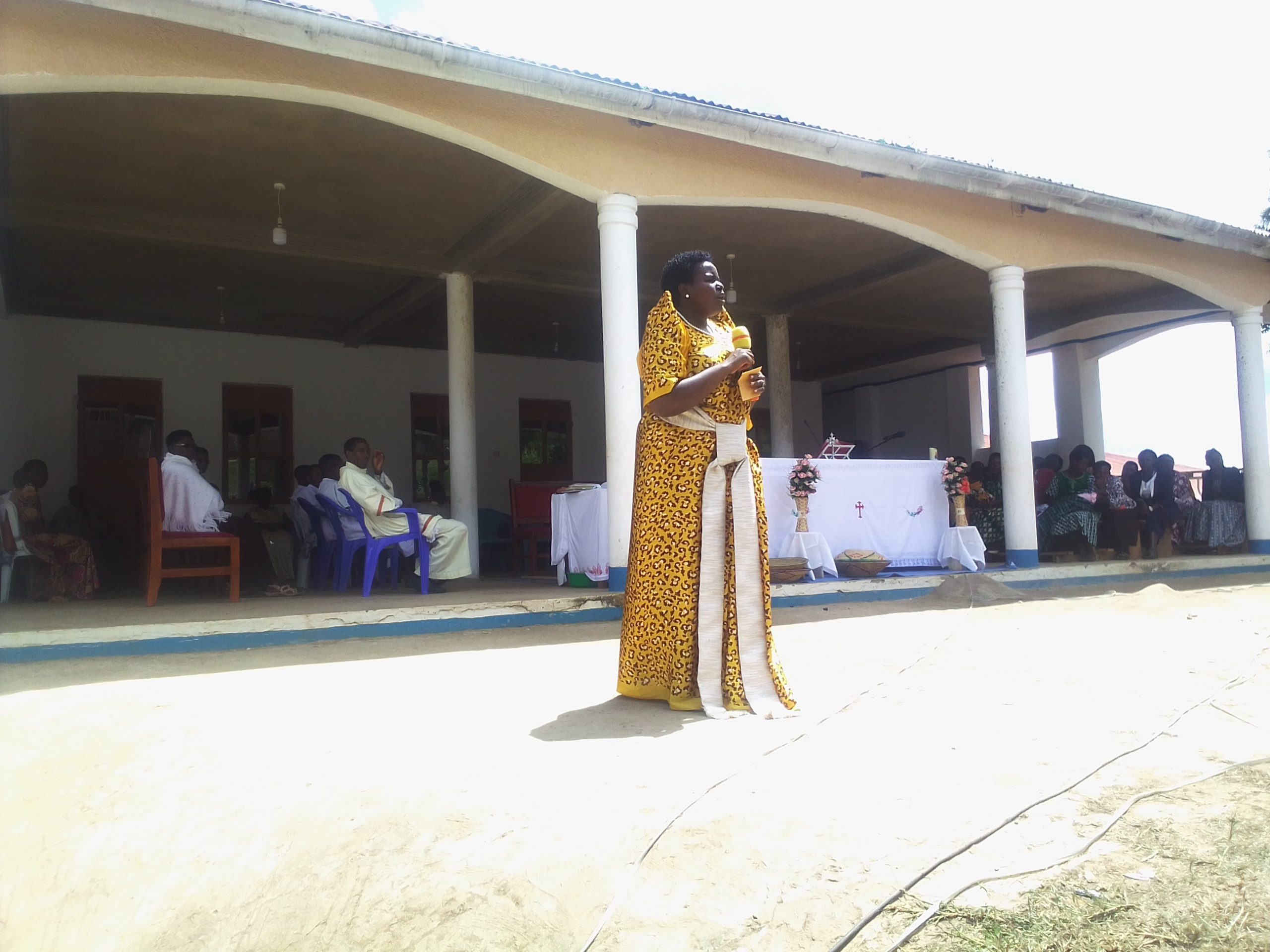 The Rubanda District Woman MP Hon Akampurira Mbabazi Prossy has shown concern on the high rate of family violence and break ups cases in the district.

Hon Akampurira Mbabazi Prossy who is a Commissioner of Parliament revealed this at the end of a 5 day charismatic conference held at Kakore catholic parish in Hamurwa town council Rubanda District.

The Commissioner of Parliament showed concern about how some men are buying pieces of land without engaging their wives in the land agreements. Akampurira said that some men in the district fear working together with their wives a thing that has affected developments in some of the families

She gave a case in point where a man who had bought a land without involving his wife and the family members died instantly leaving the land to the mafias.

She further showed concern about the high rate of family breakups in the district saying that some of the parents fight in the broad daylight in the presence of their children.

The commissioner also revealed plans of meeting women in every village about increasing household income.

Rev Fr Innocent young Buregeya who was Presiding over the charismatic conference at Kakore parish applauded the Commissioner of Parliament upon her tremendous support rendered not only in the district but also at the diocese.

Police in Sheema district are investigating circumstances under which a 28-year-old man was beaten up by mob which led to his death.

The deceased has been identified as Peter Asiimwe a resident of Mashenga, Muhito north ward Kitagata town council Sheema District.

According to Martial Tumusiime the greater Bushenyi police spokesperson the deceased was on 28th December 2022 at around 1000/c allegedly caught stealing chicken and the angry mob assaulted him leaving him unconscious.

Tumusiime told mknewslink.com that the police responded and rushed him to Kitagata hospital but he was pronounced dead in the evening at around 5:30pm.

The police PRO said that by the time police arrived at the scene, the victim was not found with the chicken he had allegedly stolen and the mob had fled. 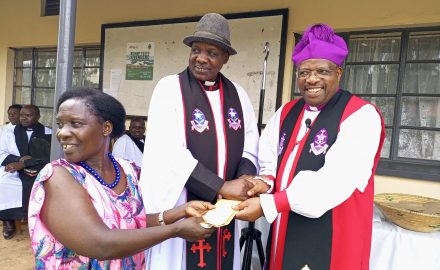 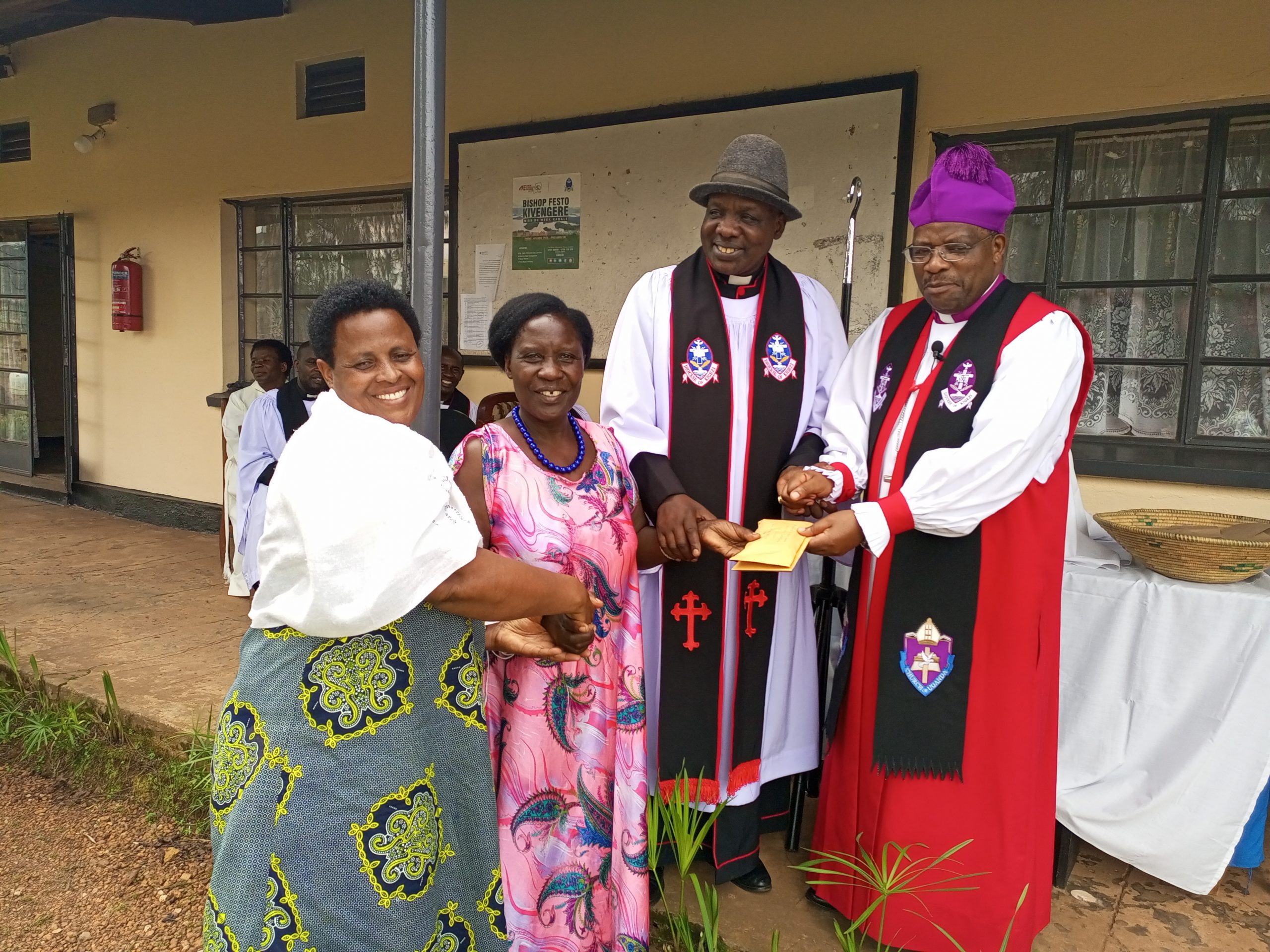 The former Diocesan Secretary of Kigezi, Rev Canon Erasmus Turyatunga has today retired from active priesthood after serving for 41 years as a priest.

At the time of his retirement, Rev Can Erasmus Turyatunga had been serving as the Diocesan Estates Officer in charge of Lands in acting capacity. He was in the middle of this year being replaced by Rev Amos Tweteise, the current Diocesan Secretary.

Preaching during the diocesan staff members Christmas service held at the diocesan headquarters at Rugarama hill, Northern division in Kabale Municipality, the Bishop of the Diocese of Kigezi, the Rt Rev Gaddie Akanjuna commended Rev Can Erasmus Turyatunga as a person who has been a truthful servant of God.

Speaking during the same Service, Rev Can Erasmus and Peace Turyatunga have thanked God for the gift of life and good Journey in service. Rev Can Turyatunga commended Diocesan staff members for embracing Unity and Cooperation during his tenure as the Diocesan Secretary. He asked Diocesan Staff members to keep United and Support the works of the diocese.

In 1982, Rev Can Erasmus Turyatunga served as church teacher second Letter, he later in 1984 went to Kabwohe for studies as a lay reader and in 1985 he became a full lay reader.

In 1986, he served at St.Johns Kigata Church of Uganda as a lay reader and in 1987, he joined Bishop Barham Divinity College as a deacon and was Ordained a full Deacon in 1989.

In 2006, he served as the Archdeacon, Kihanga Archdeaconry in Rukiga district.

From 2019, he served as the Diocesan secretary to date. 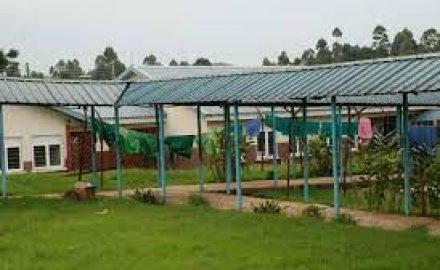 Hundreds of patients are stranded without medicine at Kisoro district hospital after the facility ran out of drugs. Kisoro hospital medical superintendent Dr. Rukunda Karekezi Benon confirmed the development saying the situation has prompted the hospital management to advise patients to buy drugs elsewhere.

Dr. Rukunda Karekezi Benon told our reporter that Kisoro hospital was supposed to receive second drug consignment on 21st October 2022 from National medical stores (NMS) but the supply has delayed. He however said that they are hoping to get supplies from NMS within this week.

He said that health workers at Kisoro hospital are just giving expertise at professionals to patients and when it comes to medicines and supply, they refer them to private clinics. He attributed the drug stock out at Kisoro hospital to influx of refugees from Democratic Republic of Congo.

Our reporter visited Kisoro hospital this evening and found some patients from humble backgrounds stranded at the facility. They told our reporter that health workers at Kisoro hospital diagnosed their diseases and advised them to buy drugs from private clinics. Most of them said that they don’t have money and cannot afford services at private health facilities and asked government to help them and deliver drugs in time.

Kisoro hospital is the only public district referral hospital and it receives more than 200 patients on a daily basis. It receives patients from Kisoro, Rubanda as well as from DR Congo and Rwanda.

By Innocent Atuganyira
IN KAGADI:
Police in Kagadi district are hunting for a man on allegations of killing his wife identified as Shaliroti Wimana 28, Wangeyo central Kyaterekera sub-county Kagadi District.
The Albertine Region Police Spokesperson Julius Allan Hakiza said the hunt for the suspect identified as 33 year old Niyontejeko Apuuli 33 has commenced.
Hakiza told our reporter that the suspect allegedly stabbed the wife to death on Wednesday in the domestic violence.
The police mouthpiece asked partners to desist from such acts and get other ways of solving their aggrevances.
According to residents, the deceased has been accusing the husband for neglecting his family.
It’s alleged that the duo fought at night after having misunderstandings which resulted in her death.

Police in Rubanda are investigating circumstances surrounding the death of two people.

It’s alleged that Kadenge left home a month back with friends who included Bedah Muhumuza, to carry timbers in Kitagata cell and since 17th November 2022, he had never been seen, until the 21st November 2022 at around 8:00am when residents of Kitagata discovered his body.

Maate said that residents notified the relatives and that on arrival they found when Muhumuza Bedah was putting on clothes of Kadenge which prompted them to lynch him to death.

Police was informed by one Laban Saturday a boda boda rider, scene was visited and processed, postmortem to both bodies was done and no suspect has been arrested yet. 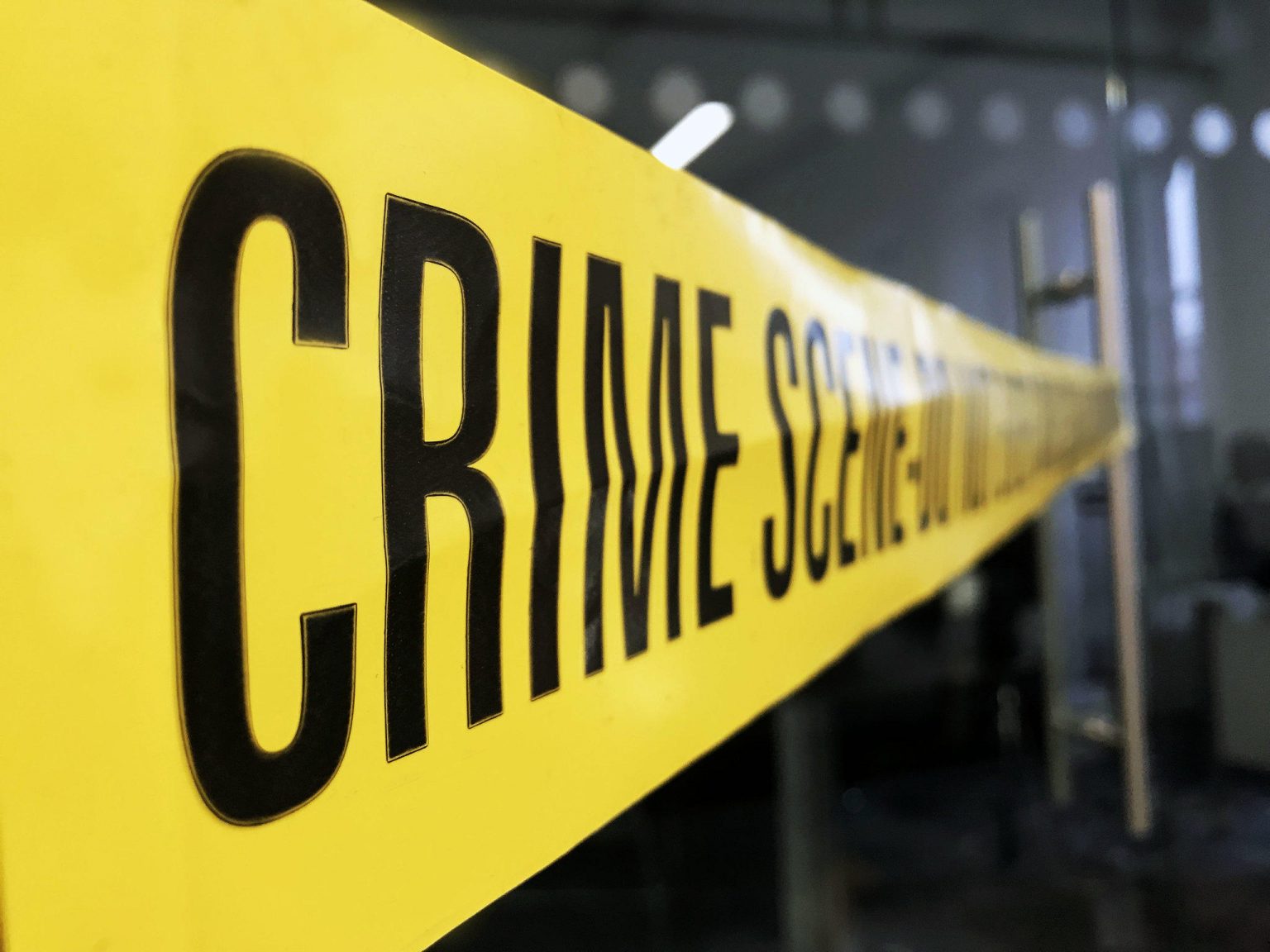 Police in Kibaale District, have finally identified the lifeless body of a man in his late 30s that was recovered Wednesday morning from the roadside in Kikumbya village, Kabasekende Sub County along Kibaale-Kagadi highway.

The deceased identified as Steven reportedly migrated from Rwanda two weeks ago and has been staying in Nyabigoma Bukonda in Kabasekende Sub County.

His body was yesterday morning found lying in the pool of blood with broken hands and legs plus a damaged skull and he is suspected to have been involved in an accident on his way back home in the wee hours of Wednesday night.

Kyalimpa Tumusiime, the Nyabigoma village youth chairperson said that Steven has no relatives in the area thus the body has been left in hands of police for a temporary burial. 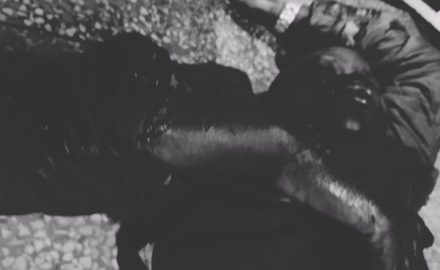 The chairperson Anakareti Biryomumisho is accused of conniving with three other goons to steal from road users in the village at night.

It is alleged that the four on 8th Nov.2022 at around 9PM attacked Mark Ndayimana a resident of Kigali Rwanda who operates a boda boda business at Nyabikoni stage in Kabale district and cut him into pieces.

Speaking to our reporter on his sick bed at Kabale regional referral hospital where he is nursing injuries sustained, Ndayimana narrated that he was hit by panga wielding men as he returned from dropping his customer.

Ndayimana wants the justice from the Kabale district Authorities to have Biryomumisho arrested, repair the motorcycle and pay all the Medical bills at Kabale regional referral hospital.

Meanwhile, Biryomumisho admitted had been part of the panga wielding Men who attacked Ndayimana but he failed to defend himself further.

He pledged to contribute 1m shillings to clear the medical bills.

The residents who preferred anonymity alleged that Biryomumisho is a notorious criminal and drunkard who drinks with women then lure them into sexual activities in addition to supporting drug dealers in the area.

They also want him impeached out of the office saying that he is a bad example and has no time to settle community cases as he spends most of the time in bars drinking alcohol.

By Sandra Tumwekwase
www.mknewslink.com
In Bushenyi—-
A third year student of Valley University of Science and Technology Bushenyi was last night murdered by unknown assailants.
The lady only identified as Susan by press time was murdered at around 8:30 pm in Kitookye cell, Central division, Bushenyi Ishaka municipality.
It is alleged that the student who was murdered during a heavy down pour was first raped by the murderers.
SP Martial Tumusiime the greater Bushenyi police spokesperson confirmed the occurrence of the gruesome incident.
He however did not divulge more information but promised to get back to our reporter once he gets a detailed report.
This is second gruesome murder on a woman in space of two months; another woman Bride Julian was splashed with acid in broad day light.
She later succumbed to the burns at Mulago hospital after one week of battling.