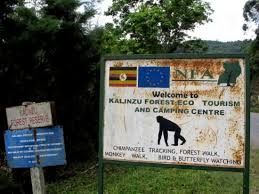 Court in Rukungiri district on Thursday 16th July 2020 ordered   Police to hand over the 400 pieces of timber that were impounded from timber dealers in Butimbe cell Rukungiri municipality to Uganda wildlife authority (UWA).

The timber allegedly plundered from Karinju sector of Imaramagambo forest in May this year attracted media intervention indicating that the forest was at a verge of being depleted after loggers secretly started cutting trees to harvest timber, charcoal and building pole building materials.

The reports forced the Rukungiri district executive committee to have an emergency a meeting on 12th May 2020 where they engaged stake holders from Uganda wildlife authority (UWA) and National forestry authority (NFA) and Uganda peoples defense forces (UPDF) on issues related to the alleged pounder.

According to Rukungiri district police commander Moses Nanoka, under today’ s guidance   of the court order, they handed over timber to Uganda wildlife authority to be taken to  stores to prevent them from being damaged.

To date, three people have pleaded guilty and were charged in courts accordingly and they are now serving their punishments in prison.

Bashir Hangi, the spokesperson Uganda wildlife authority confirmed to our reporter that they received timber from Uganda police under the court orders.

Bashir added that the received timbers were impounded by the police and are said to have been cut from Imaramagambo forest.