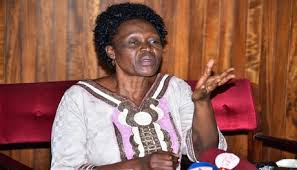 The forest covers 41,144 hectares about 410 square miles but recently, four different individuals who claimed that they had received titles of ownership on 6100 hectares measuring 27 square miles cleared part of the reserve.

The claimants include Bunyoro Kitara Kingdom which leased its land to Hoima Sugar Company totaling to 5200 hectares which is equivalent to 22 square miles to MZ investments LTD which is claiming ownership of 900 hectares about 5 square miles.

The minister who was touring the forest was saddened by the land ministry which has gone ahead granting land titles to new owners in the forest.

She called for an immediate end to the practice and corrupt officers who issued out fake land titles be brought to book.

The executive director National forest Authority Tom Okello Obong said that he was sued and issued a court injunction from accessing part of the land in conflict.

Isaac Kalemba, the speaker of parliament (Olukurato) of Bunyoro Kitara Kingdom also said that it’s unfortunate that the previous cabinets issued out a lease of 99 years to Hoima Sugar Company but as a kingdom they are looking at how they are going to end the practice.