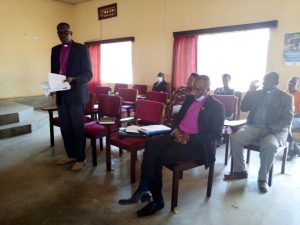 North Kigezi and Kinkiizi diocese have been working together in identifying areas facing challenges of water scarcity in the two districts of Rukungiri and Kanungu ,where several water supply projects have been set up using money from donations.

Now the government through the ministry of water and environment wants to take over the management of the water projects, a move that has drawn protests from the Church.

North Kigezi diocese has big water supply projects in Nyarushanje, Nyakagyeme, and Buhunga among others that the government is moving to gazette.

This was revealed in a meeting held at the Rukungiri district Council Hall that attracted Bishops and representatives of North Kigezi and Kinkiizi dioceses.

The organizations supplying water in the district such as National water and sewerage corporation, South-Western Umbrella, and Raising the Village as well as the district water department were also represented at the meeting.

The North Kigezi diocese Caretaker Bishop, Right Rev Tugume Tusingwire Patrick says that they invested a lot in identifying the sources and mobilizing resources, adding that people sacrificed their lands where the projects were set up, but the government instead of coming up with support is moving to forcefully take over the projects.

Atuhaire Naume, The officer from the Rural Water department in the Ministry of Water and Environment  who led the team noted that the Ministry has no money allocated for compensation and that they are going to sensitize people that once a public water project is set up,  it automatically becomes a government project and the initiators should hand it over to the responsible authority.