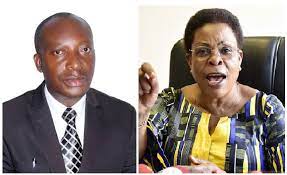 The Executive Director Public Procurement and Disposal of assets Authority (PPDA), Canon Benson Turamye has branded the Inspector General of Government (IGG), Betty Kamya as inexperienced and dared her to find any stain on him.

According to Turamye, he is shocked by Kamya’s interest in a matter that ended over five years back.

Turamye blamed this on what he has called Kamya’s failure to discern underlying political and business interests in whistleblowers reports, unlike previous IGGs.

“It is this inexperience that is being exploited by several disgruntled contractors and mafia groups with deep political connections fighting for fatty government contracts,” Turamye is quoted to have said by media.

He has prophesied that Kamya’s investigation of his work will likely have a similar ending to that of UBOS, where she interdicted UBOS bosses basing on a whistleblower’s claims of corruption only for the President to reinstate them after learning Kamya had been misled.

“I want to assure Ugandans that the IG will reopen the Shs17 billion NWSC procurement of prepaid meters without fear or favor,” Ms Kamya said.

The investigations into the fake prepaid meters is said to have been blocked by Turamye in return for a fatty position for his wife at NWSC.

A section of workers at National Water and Sewerage Corporation petitioned Ms Kamya to revisit investigations into a stalled probe into purchase of prepaid meters that developed functionality problems.

The whistleblowers want the IGG to probe the Executive Director Public Procurement and Disposal of assets Authority (PPDA), Canon Benson Turamye and his counterpart at National Water and sewerage corporation (NWSC)on claims that the two were allegedly involved in blocking an investigation into a dubious procurement deal where NWSC procured water prepaid meters with functionality issues at a cost of Shs17 billion.

It is alleged that PPDA Turamye ignored the investigations into the Shs17 billion NWSC procurement deal and instead Turamye exploited how he could benefit from the dubious procurement deal.

According to the whistleblower’s report submitted to IGG last year, the deal would now have NWSC Boss Dr. Silver Mugisha promote Turamye’s wife so that on the other hand the PPDA boss Turamye could kill the investigation into the messy procurement deal.

Ruth Kembabazi, Turamye’s wife had been recruited by NWSC as a senior Internal Auditor on August 6, 2018 at a salary scale of 3.1.

However, in a surprise move that shocked senior staff at NWSC, Mugisha abruptly promoted Kembabazi to Senior Compliance Officer on September 2, 2020, earning her a salary scale of 3.10, which is almost the salary scale of principal officers at NWSC.

Whistleblowers say Mugisha ignored to promote staff who had worked for five years at that public company, well knowing that Kembabazi’s promotion would save him from PPDA investigation as agreed with Turamye.

On the other hand, the rest of PPDA investigators have never forgiven Turamye for aborting the investigation of the Shs17 billion dubious procurement and are calling for a hammer to fall on his head. Turamye is accused in many several other dealings.

Mr Turamye has worked at PDDA for more than 10 years before he was appointed by the board to the position of CEO. However, the latest allegations on him involving NWSC could drag NWSC into mad given that Eng. Mugisha and his predecessor have worked hard to turn around the corporation.