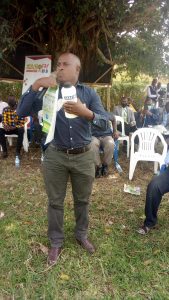 Farmers in Ankole region have expressed dissatisfaction with the government for taking a tsetse fly invasion in the region lightly.

According Robert Kabatereine the Chairman Mbarara Network Of Farmers Voice Government has not swiftly mitigated the tsetse fly invasion in the region.

As one way of mitigating the infestation , Kabatereine says government should Carry out mass spraying against tsetse fly in the most affected areas that include Kiruhura , Isingiro which are adjacent to Lake Mburo National Park where tsetse flies breed from.

Kabatereine further states that dairy farmers are now counting loses as a result of tsetse flies.

He is now appealing to government through its ministry of Agriculture Fisheries, Animal husbandry to take action and save dairy Farmers.

The same issue was raised by Nyabushozi member of Parliament, Hon. Wilson Kajwengye as the matter of national importance during a plenary sitting on Tuesday, 03 May 2022 chaired by Speaker, Anita Among.

Kajwengye said that for the past five years, cattle farmers in Kiruhura have borne the burden of fighting tsetse flies, at a cost that he said was exorbitant and discouraging to commercial cattle farmers.

“Unfortunately, we have lost the battle because the disease is chronic and cows lose weight. The Ministry of Agriculture, Animal Industry and Fisheries has intervened but minimally,” said Kajwengye.

He said that an estimated 100,000 herds of cattle have been affected by the diseases caused by the flies.
Kajwengye said Kiruhura has registered notable financial loss resulting from the decline in milk and beef production.

“It is estimated that the district has lost Shs26 billion and Shs15 billion from sales of milk and beef respectively,” he said.

He prayed that the Ministry of Agriculture should urgently procure and distribute tsetse fly traps saying they are easy to use and are environmentally friendly.

He also appealed to the ministry to work with the Ministry of Trade, Tourism and Antiquities to carryout studies on tsetse fly control measures that would include development of an appropriate acaricide that kills tsetse flies.

Speaker Among said she received similar reports from residents during her recent visit to Kiruhura and asked the Agriculture Ministry to urgently assess the disease burden in the district.

“I think what you need to do is to send a team there to assess the level of the damage that has been caused,” she said.